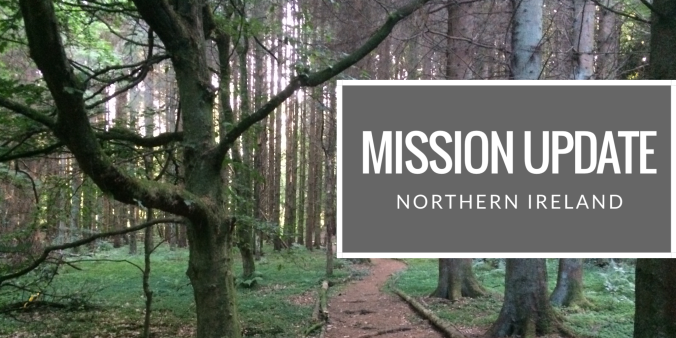 So, I’ve waited until now to post this in the hope that my visa might show up and I’d have good news to share, but since the week is almost over and I haven’t heard anything from the embassy yet, it’s time to move on and share with you some of the adventures I’ve had over the past month. 🙂

In my last blog post, I’d just returned to Ireland from the Czech Republic with the three papers I needed to fulfill the requirements for my visa. I arrived on June 29 and spent the weekend with my wonderful friends, the Marriott family, at their home in Mullingar. On Monday morning I took an early train to Dublin to revisit the Czech Embassy. I was super nervous. I kept wondering whether my paperwork would be enough this time, or if something would be wrong and the whole process delayed all over again. As I walked from the station to the embassy I prayed that God would go with me and direct my steps. 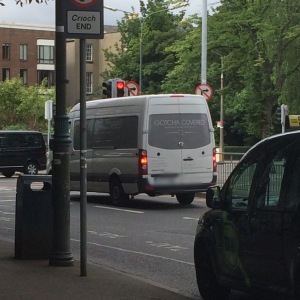 And while I was praying a van drove past with the words “Gotcha Covered” printed on the back window. I laughed so hard! I can’t claim that it was a direct message from God, but it made me feel calmer inside. My reception at the embassy was much better than the previous time. The woman I’d met before received me kindly, had no fault to find with my paperwork, and even told me she hoped my visa would come quickly so that I could attend some of the camps with the kids this summer. I left feeling so encouraged. I know a lot of you were praying during that time, and I’d like to thank you. Your prayers were definitely heard.

The next day, Independence Day, I traveled from Mullingar up to Portadown in Northern Ireland to connect with some friends of Keifer’s and spend time volunteering for Drop Inn Ministries. 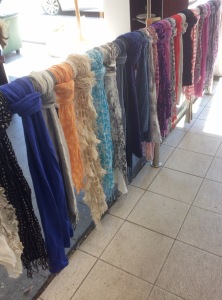 Drop Inn raises money to help those in need around the world through thrift stores, coffee shops, and donations. There are even some Drop Inn centers located in my home state, Iowa (though it took coming over to Ireland for me to learn that…). Over the next two weeks I helped at several locations in Armagh and Portadown. 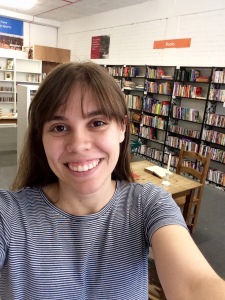 I worked in two different thrift stores in Portadown, organizing, cleaning, helping customers, and running errands. One of our biggest projects was sorting through donated clothing, putting aside tattered and stained items for recycling and hanging new and like-new merchandise out on display. My favorite project was the day we received several boxes of books which had to be organized and put out on the shelves. But whether I was dusting, sweeping, or organizing, my favorite part of the job was seeing the many people who loved the thrift shop and found exactly what they needed at prices they could afford.

Along with working in the thrift stores, I also helped at two different coffee shops, one in Portadown and the other in Armagh. I have coffee shop experience from my time in America, and it was fun to get back into the familiar atmosphere. I loved all my fellow workers at both shops, and I even started recognizing some of the regular customers after just a few days. 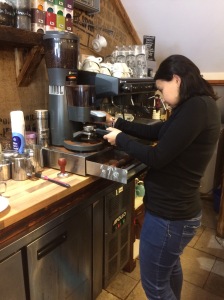 Washing dishes and restocking the pop fridge were all jobs I was used to. Something I wasn’t used to was arranging vases of fresh flowers for every table. But while I was there I did it twice and loved it. It really brought out my creative side. 😉 One of my favorite experiences at the shop in Armagh was when we carried drink samples outside and set up a 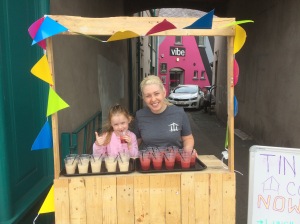 little stand to attract passersby. It was a cold gray day, but I think we made some lives a little happier. If I have the chance someday, I would definitely go back and do volunteer work for Drop Inn again. The experience I had was invaluable for my own ministry career, and the friendships I made are some that I hope will continue even while I’m gone. 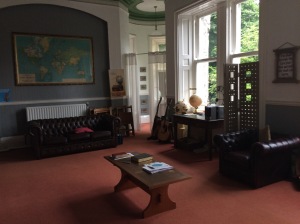 While volunteering for Drop Inn Ministries, I was able to make my home base at Ballyards Castle. I stayed in a dorm space with two other girls, attended morning prayer times in the castle’s special prayer room, and attended meal times with the other people living at the castle. While I was there I got to meet Ronnie and Carolyn Dawson, the founders of Drop Inn, and their family. I also made friends with the other volunteers and interns, some who had come from as far away as Brazil or Belarus to work with the ministry. There was even a fellow Iowan there, Jesse, who, with his wife Anastasija, helped me settle into the program and saw that I never wanted for work or a friend to talk to. 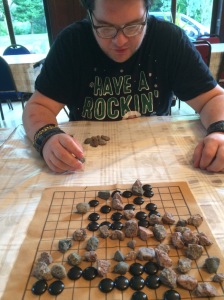 But it was Matt who made my time at Ballyards really special. We bonded over movies and books and a whole host of other nerdy topics, and our friendship took off from there. Matt is a great conversationalist, super informed and thoughtful. The amount I learned from him about Northern Ireland, the Irish people, and about Ballyards Castle itself helped me get a better understanding of the culture than I would have had on my own. His joy in pathfinding and the tour he gave me around the woods and grounds at Ballyards will always be a favorite memory. It isn’t often that I meet someone and we become best friends instantly, but it was that way for me with Matt. I’m really thankful that the Lord took me to Ballyards. It’s an experience I will never forget.

On July 18, Keifer and his friend John flew over from the Czech Republic to Belfast to visit me for two days. It had been three weeks since I’d seen Keifer last (which, when 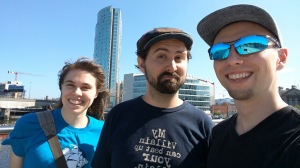 you’re engaged with a wedding coming up, feels like forever), and I cannot begin to express how thrilled I was that both of them would spend the time and money to come and see me. We didn’t really do many touristy things while they were there except walk around Belfast, but we had a blast just being together. I’m really grateful for friends like Keifer and John, and I can’t wait to see them both again. 🙂

Several people have asked me recently what will happen if my visa doesn’t come in before I go back to America for my wedding. If the visa doesn’t come, we will have to cancel my visa process and try again after the wedding. I will still be able to fly back with Keifer and Max to America on August 21, but I will NOT be able to be in the Czech Republic for the last Rock Solid Camp of the year, say goodbye to my friends, pack up my stuff, or try on my wedding dress to see if it needs alterations. For now I am waiting in Mullingar, praying that my visa will come in within the next week so that I can finish up strong in the Czech Republic. If you would continue to pray also that God’s will would be done, I would very much appreciate it.

Thank you to all of you who have been reading about my adventures and supporting me on this mission trip! I will continue to keep you updated on Facebook about my visa, and the next monthly mission update I write will be written from America!