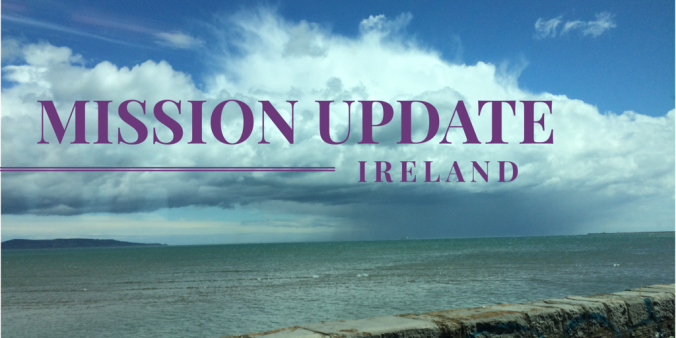 Whenever I make a new blog post, I start by creating the title picture. I want an image that encompasses the subject matter — in this case, the month I spent in the Republic of Ireland. I had planned on using this image of an airplane,

NOT as an advertisement for Ryanair, but as a way to capture all the traveling I’ve done between the Czech Republic and Ireland during June. However, the real moment that stood out to me this past month, the moment that repeatedly shaped my decisions and caused me to draw closer to the Lord, was the brief period of time I spent by the ocean near Dublin. For all of you who have been waiting for an update about my ongoing visa process … well, it’s finally time!

Due to several complications, it took me longer than I’d hoped to collect all the forms I needed to apply for a long-term visa for the Czech Republic. But God brought everything together in an exciting way, and by the end of May I finally had all my paperwork together. Keifer and I flew to Ireland at the beginning of June to stay with friends while I applied for my visa at the Czech Embassy in Dublin. Before we left the Czech Republic, I called the embassy and set up an appointment for June 6. But when Keifer and I arrived at the embassy, we

found, much to our dismay, that they didn’t have an appointment for me. Worse still, they’d never heard of the man I’d spoken to on the phone, who had introduced himself as “Patrick,” spoken Czech, and set up my appointment. Keifer even checked the number in my phone’s call log, and it was the same number as the embassy. We were flummoxed. The embassy kindly set up a new appointment for me on June 21, the day I was supposed to fly back to the Czech Republic, and Keifer and I beat a hasty retreat. I’ll admit I was very upset. But instead of letting our day be ruined, Keifer suggested we make the most of it. We took a tram to the ocean and spent about an hour walking along the beach, discussing what we should do next. We also did a lot of praying, asking God if I should stay in Ireland and apply for the visa, or if He had another path for us. God spoke to both of our hearts as we looked out over the water, reminding us how His paths aren’t always easy, but how they’re always an adventure. Together we chose that I would stay in Ireland and apply on the 21st.

So I stayed. And it turned out to be a blessing. The family who had taken me in were supremely kind and loving. They saw to my needs and made sure I never felt unwanted or alone. I loved being able to play and spend time with their three kids, two boys (8yo and 6yo) and a girl (3yo). It reminded me so much of when my siblings were young, and I was the oldest and the ringleader. We did everything from Lego to jumping on the trampoline, from cooking imaginary food with play dough to watching Spy Kids for the first time. (Their first time. Not mine!) When I left their home on the morning of the 21st, I felt supremely refreshed.

As soon as I got to Dublin I went straight to the embassy. The moment I stepped inside I knew I was in for trouble. The woman helping me was tense and terse, like she was having a really bad day. She looked through the pile of papers I’d carefully prepared and told me I didn’t have everything I would need to apply. This was disappointing in itself, but understandable, and something I knew I could fix. But then she spent the next hour telling me how I was crazy to try and apply for a visa, how my visa could take months to come, how I was wasting my money, and that I should just go back to America. That was when I got discouraged. The things she was saying were, again, not untrue, and obviously real possibilities. I actually toyed with the idea of calling it quits. But then I remembered the people praying for me, and those moments by the ocean where I’d chosen to try and apply for my visa despite everything. Instead of quitting, I convinced the visa worker that I did want to apply, no matter what. She told me I had two weeks to bring her the three documents she wanted. Then I ran outside, jumped in the taxi my friends had called for me, and was raced to the airport just in time to catch my flight back to the Czech Republic.

And Now … The Third Try

I arrived back in CZ supremely discouraged. I didn’t know how I was ever going to be able to move forward. But with the help of Keifer, Max, Zuzka, my landlady, an awesome translator, and the kind employees at the US Embassy in Prague, I’m now back in Ireland with all the papers I need. I’ll be taking them to the Czech Embassy in Dublin early next week. Please pray that this wouldn’t be a dead end, and that my visa can move forward. I’ve seen God working in so many ways over this past month, and know that much of it is because of your prayers. Though Ireland may not be my “home,” it’s the place where God has called me for now. As I wait here during the month of July, I’ll continue to minister however I can in whatever ways I can. I can’t wait to see the new adventures the Lord will bring. Stay tuned!

Thanks to Zuzka, I now have a wedding dress! I can’t show the real pictures of it, since Keifer isn’t allowed to see them, but here are two that I didn’t choose. 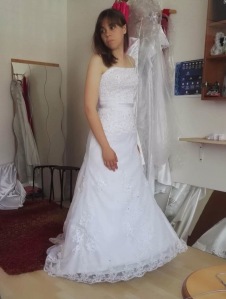 You can tell by my face that I wasn’t “in love,” but that changed the moment I found my dress. 🙂 Now I can’t wait until September for the big reveal! Well, and finally being married of course. 😉

Traveling Alone for the First Time

With all the craziness going on lately, I’ve finally had to overcome my fear of riding on public transit alone. Instead of always being afraid of jumping on the wrong train and ending up stranded in some unknown place, I am now the master of my fate. I can buy my own tickets, check my own train timetables (in Czech and in English!), and … I haven’t taken a train in the wrong direction yet. 🙂 I feel much more competent and grownup now, like I’m finally adjusting to a new culture. I’m excited to see what other changes are waiting just down the road.