I was driving up a steep hill when I felt my engine give a cough and start to splutter. My vehicle bucked and kicked its way up the incline and kept running, but after a few more hills and more internal gyrations the dreaded “Service Engine Soon” light came on right on the outskirts of town, a red beacon of doom.

My Buick Park Avenue — which I affectionately named “Miranda” upon purchase — has the soul of an old Southern belle just ready for the nursing home. While still grand and beautiful on the outside, Miranda’s internal organs are weak and failing. This isn’t the first time in our relationship that she’s needed repairs. Nor is it the second or third. I cannot begin to tell you how often that car has broken down. She’s stranded me at a shopping mall, stranded me in Kansas City, leaked coolant all over the engine, and blown hot air out of one vent while the other blew cold. I’ve replaced her steering column, replaced her coolant elbows, and now, in order for her to properly accelerate up hills, I need to replace something called a “solenoid.” My knowledge of the internal workings of cars is slowly increasing over time.

But even though Miranda’s condition has been diagnosed, and I have a friendly mechanic ready to perform surgery on her, I still have two problems. The first is money. This repair is going to be costly, a labor-intensive operation, and as a missionary who just gave up her reliable job at the coffee shop to prepare to go overseas, this expense couldn’t have come at a worse time.

Which leads to my second problem — God. Ok, scratch that. My problem isn’t really God. Sure, I’d like to think it is, but in reality, my problem is my own response to what God wants me to do.

The moment my “Service Engine Soon” light blinked on, my immediate reaction was a mixture of fear, anger, and confusion. “That’s it! I’ve had it. I am so done with this car. I’ve poured tons of money into her, I’ve fixed every issue she threw my way. It’s never enough! I don’t know why You gave her to me, God, but You obviously made a mistake. I can’t afford to keep her, so it’s time I got rid of her.”

Yet, when I prayed about it later, I felt the Lord telling me to once again repair my car.

I’ll admit that I cried. I felt frustrated and afraid. But an unexpected phone call from my missionary boyfriend brought some encouragement. “Maybe God has a story to tell through this,” he said.

So I prayed again, this time asking for understanding.

That’s when the Lord began to work on my heart. He showed me that I like things that are easy to fix. I find pleasure in quickly resolving an issue and moving on to something else.

What I don’t like, however, are things that are beyond my ability to fix. When something is unrepairable, I don’t even try. I reject it. I can’t be bothered. The fact that I’d tried so hard with Miranda only to fail again and again irritated me. If Miranda was just a piece of junk, then she wasn’t worth any more of my time and effort.

But that isn’t the way the Lord views things. He’s used to brokenness. He’s used to seeing “unrepairable” people, “unrepairable” relationships, and “unrepairable” churches. And unlike me, the Lord never gives up. He’s willing to keep working until a situation is fixed. He doesn’t get angry or call something a waste of time and money. Instead, He gave His most important, most valued object, His only Son, Jesus, for the sake of an “unredeemable” world. God didn’t give in part. He gave it all.

So once again, Miranda is being repaired. I’m stepping out in faith, trusting for provision and for her speedy recovery. Early next week I travel down to a mission conference near Kansas City. If Miranda is able to be fixed in time, then she and I have a lot of hilly territory to climb.

But even if she isn’t ready, I’ve learned an important lesson. God never gives up on the “unrepairable,” and, with His help, I’m not going to either.

Hey everybody! As of this posting, I only have six more weeks until I arrive in the Czech Republic! Time is certainly going fast. Here’s a look at some of the exciting things that happened over this past month, as well as an update on my fundraising progress.

I asked a bunch of people to pray about this, so if you didn’t see my Facebook update, I just want to make sure you know that I did buy a ticket to the Czech Republic! I’ll be flying out from Chicago on March 22. This is a huge blessing right now. I no longer have to wait and wonder and feel unsure. The date is set in stone, and I can plan accordingly. A big thank you to everyone who prayed for wisdom for me. Please continue to be in prayer as I plan and pack and prepare for travel.

Another answered prayer request is that I did have opportunities to speak in two churches this past month. The first church I spoke to was my own home church. I gave an update on my plans and how fundraising was going, and had the chance to ask for their support. My second opportunity came when I spoke at a local church that many of my friends attend. I had that “newcomer’s nervousness” at first, but they welcomed me with open arms. I talked about my calling to the Czech Republic and showed pictures of the area, friends, and the mission work itself. I loved being able to share with a whole new audience, and was blessed by how many people came to talk to me afterwards. What an encouragement.

On a different note, just yesterday I spoke to a kid’s club in a church in a nearby town. There were eight kids, all different ages. I showed them my Czech money and Bibles and fun stuff, told stories about my adventures, and talked about how we can all live like missionaries no matter how old we are. We had a ton of fun playing some of the games I’d learned at the Rock Solid Club, and one of the girls even gave me this card.

I came away feeling very blessed and loved. Paul was right when he said to Timothy, “Let no one despise you for your youth, but set the believers an example in speech, in conduct, in love, in faith, in purity” (1 Timothy 4:12 ESV). The kids I met yesterday really inspired me to keep doing what I’m doing, and to keep going hard after God.

Another month of fundraising has come and gone, and God has blessed me with several more financial partners. Together we’ve managed to reach $780 of pledged monthly support. Over a third of my goal! As you can see from the graph below, the progress over these last few months has been pretty steady, but there is still much to do if I’m to meet my goal in the next six weeks. 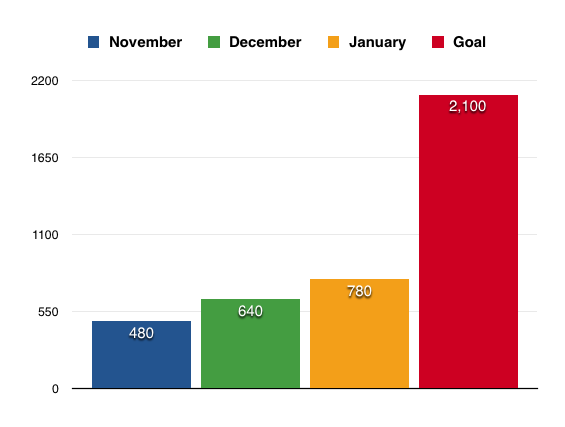 If you, or someone you know, is interested in supporting me monthly over the course of this year while I am on the mission field, would you please let me know? I need to have an idea of how much support I have before I head overseas. You will find an automatic withdrawal form and a link to the PayPal donation site under the “Partnering with Caity” tab above on my blog. And if you ever have any questions about how to donate, please don’t hesitate to contact me.

I’d also like to say a really big “THANK YOU” to all of my financial partners, those who gave me one-time gifts, and those who took the time to make their pledges a reality over the past month. No matter how big or small, your donation made it possible for me to afford plane tickets now, when I needed them, and will make it possible for me to live and work and eat while I am in the Czech Republic. I couldn’t do this without you.

I left my job at the coffee shop at the end of January. It was hard to leave my awesome coworkers behind, and also hard to leave behind a reliable source of provision. But I know that God is calling me on, and I’m trusting Him to provide. Please be in prayer for me as I move forward. There is so much to do and prepare that some days I feel off balance, wondering what I’m forgetting or upset over what I didn’t get done. Please pray for peace, God’s wisdom and guidance, and that I would use my time well.

Please continue to pray that I would receive the monthly support I need for my mission work.

Please pray that I wouldn’t give in to stress. Some days life feels too big for me to handle, and I start to get anxious and bite peoples’ heads off. But that is NOT the kind of person I want to be right now. Please pray that I would choose joy over stress, and that I could view each day as an adventure instead of an inconvenience.

I’ll continue to keep you all updated as time goes by.